A History of Britain’s Railways

This line divides into two parts. The southern section runs across through the centre of Glasgow. At its east end it runs near High Street, the oldest part of the city, crosses the River Clyde to the Gorbals and then finishes at Shields Road on the south side of the city. The northern section starts at High Street and runs north to Springburn. 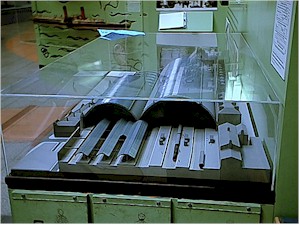 St Enoch was one of the principal stations in Glasgow. It had two large glass trainsheds. It was originally owned by the City of Glasgow Union Railway, which was a joint railway between the Glasgow and South Western Railway and the North British Railway and had platforms which could serve both the city union line north to the High street Junctions and south to Gorbals and Pollockshields. Most of the platforms served the lines running south for the GSW's line to Carlisle via Dumfries. The station came under complete control of the G&SW.

There were a triangle of lines just outside the station and trains could bypass the station - the bypass being open today. In the triangle of lines was a locomotive shed. Both the station and locomotive shed were at first floow level and oil would drip down from the locomotive shed on walkers underneath. The station closed to passengers, was briefly used by postal trains and then became a car-park. The train sheds were later demolished and even later the stonework and St Enoch's hotel were demolished and used to fill in the Queen's Dock in preparation for the building of the Scottish Exhibition Centre.

The view shows the site of a bridge on the line between Haghill Junction and Parkhead. The line formerly ran from left to right on the embankment.

Sighthill Junction was renamed Sighthill East Junction [2nd] on the openeing of the Cowlairs Chord from Sighthill West Junction to Cowlairs South Junction.

The Sighthill branch ran parallel to the line here and led to the large goods yard to the south east of this site. During an early dispute with the Edinburgh and Glasgow Railway the Glasgow, Dumbarton and Helensburgh Railway ran its trains allow this line and onto the line at St Rollox for access to Buchanan Street. The Sighthill Branch ran parallel from here up to Cowlairs. To the north of the station the Cowlairs Chord comes in from the site of the one-time Cowlairs station. The chord gives high-level Queen Street direct access to the City of Glasgow Union Railway and the Garnkirk and Glasgow Railway lines for running to Cumbernauld.