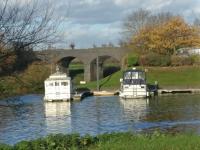 One of the old railway bridges over the Avon at Tewkesbury survives, the other (out of shot to the right) has been replaced by a lattice structure ...
John Thorn 23/11/2017
1 of 1 images.

Since 1959, there has been a most unusual bridge across the M50 motorway near Ripple, Worcestershire. Four identical channel sections cover both sides ...
Ken Strachan 18/03/2012