Falahill Summit: A southbound service on the Borders Railway passes to the east of Falahill Village, between Tynehead and Heriot, on the morning of 10 May 2018. The road on the left runs to a junction with the A7 at the south end of the village. 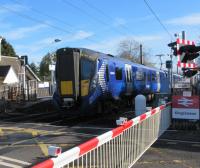 Kingsknowe: Shiny new level-crossing gates try to steal the show from an Edinburgh to Glasgow Central stopper at Kingsknowe on 16 March 2020. Kingsknowe didn't have much of an existence until the railway came and is no more than a small residential suburb even now. Station usage is not great.

Carlisle: 45699 'Galatea', currently running as 45562 'Alberta', built at Crewe in 1936, just arrived at Carlisle, at lunchtime on Saturday, 14th March 2020. This locomotive brought this RTC excursion train from Carnforth taking over from E 3137 (86 259) from London. After a 90 minutes stopover here, it returned south via the Settle & Carlisle and Clitheroe Lines to Preston though it was originally scheduled to run back behind steam to Carnforth via the Cumbrian Coast Line. It was diverted following a landslide on the latter on the previous day. 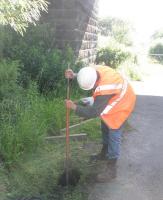 Bathgate East Junction [1st]: Rumours of a treasure wagon buried somewhere in Bathgate during the A to B ground investigation had spurred this gold digger to take up his iron pinch bar and get the ground shifted. Photo by A Driller.

Rufford: 142042 departs from Rufford late in the evening of 18 April 2014 with an Ormskirk to Preston service. After the mass withdrawal of most of the Northern Pacer fleet this unit was scrapped at Newport Docks in 2020.

Worcestershire Parkway: RAILSCOT can exclusively reveal that the reason for the last delay in the opening of the first new station in Worcestershire for a hundred years and one week is to allow clandestine night time trials of airliner-inspired inflatable, illuminated escape chutes. Unfortunately as we were not officially invited to this trial, we could not quiz GWR technical staff as to why passengers were expected to detrain from a power car. Perhaps it was the only place they had room to fit the slide?

Garstang and Catterall: A significant load of flasks for 88005 'Minerva' and 88006 'Juno' as they head from Sellafield to Crewe at Garstang and Catterall on 30th April 2019. This run will have been under diesel power as far as Carnforth and then 'pans up' for the remainder of the trip.