Harleston: The rather grand frontage of the former Waveney Valley Railway station at Harleston as it appeared on 26th March 1978. Located on the line between Tivetshall and Beccles, it lost its passenger service in 1953 and the remaining freight service ended in April 1966. It later became a listed building in view of its architectural merit.

Oubeck Loops: 66013, on the thrice weekly Hardendale to Margam freight, climbs slowly up the bank out of Lancaster on 4th June 2021. It was briefly looped at Oubeck to allow a passenger service to pass and then continued on its way south.

Uphall: An Edinburgh service approaches Uphall on 26 May 2021. Uphall station opened as Houston, named after a 'big hoose' some way off; a tiny Uphall village was even further away. Things changed pretty soon when the shale oil industry got going and this corner of West Lothian became a little less sleepy.

Kinlochleven Aluminium Smelter: The aluminium smelter at Kinlochleven viewed from the south east in 1995. The pipes to the right run uphill and east to the Blackwater Reservoir. During construction a temporary railway was built between the works and reservoir - with two rope worked inclines. The longer term tramway between the works and pier was at the far end of the building seen here - the north side of the works. The tramway closed around 1960 and works closed in 2000.

Kinlochleven Aluminium Smelter: Kinlochleven smelter viewed from the south in 1995. Most of the site was cleared a couple of years after closure in 2000, although the hydroelectric power station remains (the east side of the site - right in this view). 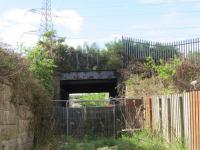 Wanton Walls Junction [1st]: I have to check a map every time this confusing area comes up. This overbridge is on the exact site of the original Wanton Walls Junction where the Lothian Lines left the Monktonhall to Niddrie West connection. The box was just off to the left in this view looking south. The line then curved to parallel the ECML which is only 200 yards or so away 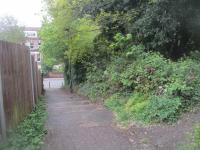 Palace Gates Wood Green: These steps alongside a short surviving (but derelict) section of trackbed of the former Palace Gates branch (on right) in north London, were provided to allow passengers quick access to the trains from the residential area centred on Park Avenue. After the line closed, the steps were retained to continue to provide a more convenient pedestrian route between the Park Avenue area and the new residential estate built on and around the former Palace Gates Wood Green terminus, as well as to the nearby GNR's Wood Green (now Alexandra Palace) station and which is still open. This view is looking towards Park Avenue on 8th May 2021. The line crossed Park Avenue by bridge, just to the right of the bottom of the steps, but which has long since been demolished, only the abutments remaining (see one of my previous pics for a view of those).

Dumfries Goods: Looking south from Annan Road bridge towards Dumfries Goods and Mineral Station in 1989. The presence of vans and piles of coal suggest the yard was still active at the time, with a small wagon repair facility.

Dumfries: Jubilee 45593 'Kolhapur' tops up with water whilst calling at Dumfries with the summer Saturday 06.40 Birmingham – Glasgow service on 20th August 1966. 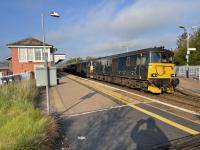 Stonehaven: Caledonian Sleeper service, double headed with 73970 leading and 73971 behind, at Stonehaven on 1st June 2021.