The next round of the popular TV programme 'Great British Railway Journeys' continues next week (21-25 January) with Michael Portillo travelling across Scotland (BBC2 1830 - 1900). Recording of the programme was completed last September. [Railscot] 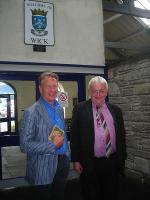 End of the line for Michael Portillo during the recording of Great British Railway Journeys, seen here at Wick with John Yellowlees in September 2012. [Editors note: The broad smiles are due to the pair having just discovered that they buy their shirts from the same website. (RailShirt.com)]
Location: Wick
Company: Inverness and Ross-shire Railway
/09/2012 John Yellowlees Collection 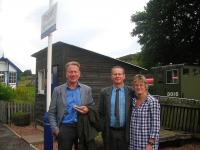 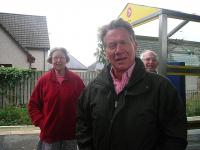 Photocall on the platform at Beauly station during a break in the recording of Great British Railway Journeys in September 2012. Left to right are railway author Anne Mary Paterson, programme presenter Michael Portillo and Mr Paterson. The series featuring the journey to the far north kicks off on BBC2 at 18.30 on Monday 21 January.
Location: Beauly
Company: Sutherland Railway
/09/2012 John Yellowlees Collection