It's full steam ahead for Salmon on the Deeside Railway [STV]

Anybody who has ever watched The Railway Children, Brief Encounter or Murder on the Orient Express will appreciate there is something magical about steam trains. It could be the sound of the vehicles cranking into gear, the soothing combination of humans and machinery in perfect sync or the sense of stepping back into another time, but loyal fans of the locomotives just can't get enough.They may not be eco-friendly, or move particularly quickly. But when W H Auden wrote Night Mail, and used the rhythm of the train as the backdrop to his poem, it demonstrated why these symbols from another age still strike a chord. The volunteers who run the Deeside Railway in Aberdeenshire know this and their efforts have helped inspire a renaissance of interest in these trains in the 21st century. Now they've unveiled Salmon, a new locomotive that has just arrived at the Milton of Crathes station for the duration of 2014. 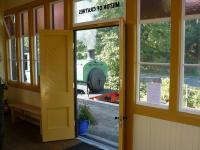 The old station building previously at Oldmeldrum is enjoying a new lease of life at Milton of Crathes on the Royal Deeside railway. Here it is during celebrations to mark the 160th anniversary of the opening of the first section from Aberdeen to Banchory on 8th September 1853. [See image 12433]
Location: Milton of Crathes
Company: Deeside Railway
07/09/2013 John Williamson 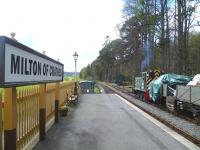