The first of a fleet of stand-in trains has arrived in Scotland to help ease ScotRails carriage shortage crisis. It is due to be among ten electric trains as stop-gaps on the main Edinburgh-Glasgow line, where some rush-hour services have lost carriages. The class 365 train arrived in Glasgow yesterday for testing and driver training. The fleet is expected to enter service around June, operating mainly as eight-carriage trains, compared to six on many current services. It will help ease overcrowding caused by delays to new Hitachi trains, and four others leaving ScotRail because their leases have expired. However, ScotRail has still to reach formal agreement to lease the trains, previously run by Govia Thameslink.

View north from the station concourse at Kings Cross on 23 July 2005 looking out along the platforms. A pair of 365 units will leave shortly with outer suburban services for Peterborough and Cambridge from platforms 7 and 8, while a GNER HST is on turnaround at platform 6.
Location: Kings Cross
Company: London to Peterborough (Great Northern Railway)
23/07/2005 John Furnevel

Happy to be leaving - 365502 certainly has that 'bugs in its teeth' look as it awaits its 10.30 departure time for King's Cross in platform 7 at Cambridge on 5 December.
Location: Cambridge
Company: Great Eastern Railway
05/12/2015 Ken Strachan 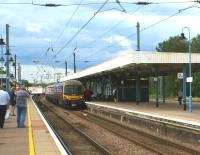 A Class 365 EMU arrives at Ely on 4 July 2012 with a Kings Lynn to London Kings Cross service as HGVs start to move over the level crossing at the north end of the station. Although there is an underpass for cars and small vans, larger vehicles have to use the crossing which can lead to significant delays as rail traffic at times can be fairly busy.
Location: Ely
Company: Eastern Counties Railway
04/07/2012 John McIntyre