ScotRail customers at Haymarket station have been treated to an orchestral performance. Members of the Royal Scottish National Orchestra (RSNO) wowed commuters at Haymarket station with a special concert. As part of the concert, ScotRail Conductor Caroline MacFarlane swapped a ticket machine for a baton and led the orchestra. ScotRail has supported the RSNO since 2008, when it became the official travel partner to the orchestra. 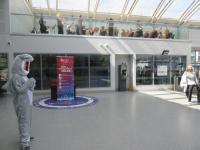 The Royal Scottish National Orchestra playing today (6th June) at Haymarket. The shark is because the RSNO with the Edinburgh International Film Festival are presenting JAWS in concert at the Edinburgh Festival Theatre on 22 June.
Location: Haymarket
Company: Edinburgh and Glasgow Railway
06/06/2018 John Yellowlees