This line connected Bala westwards to Ffestiniog and Blaenau Ffestiniog. A short portion of the line remains in use as the terminus of the Conwy Valley line in Blaenau Ffestiniog, and an out of use portion runs as far south as Trawsfynydd beyond which it is closed and lifted.

The line originally reached Ffestiniog in 1882 from the east and was extended on in 1883, after the Festiniog and Blaenau Railway was converted to standard gauge, to Blaenau Ffestiniog.

It closed to passengers on January the 2nd, 1960 and to freight on January the 27th 1961. A new link (by a BTC Act of 1959) to the north was made with the Conwy Valley line (the former Blaenau Festiniog Branch (London and North Western Railway)) on the 20th of April 1964 to provide rail access to the former site of Trawsfynydd Lake Halt where a depot for the nearby nuclear power station was built.

In 1998 the line south of Blaenau Ffestiniog (excluded) closed to traffic but has been retained.

Bala Lake station with the afternoon service to LLanuwchllyn service waiting to depart on 3rd April 2019. The large footbridge dates from the days of ...
Alastair McLellan 03/04/2019
2 of 2 images. 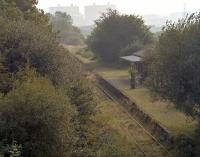 Looking south over Maentwrog Road station in 2002 towards the twin Magnox reactors of Trawsfynydd nuclear power station. Closed to passengers in 1960 ...
Ewan Crawford //2002
1 of 1 images.

View through the old Festiniog station site towards Blaenau Ffestiniog on 15 March 2015. [Some sources show the station name as Llan Ffestiniog, ...
Mark Bartlett 15/03/2015

Looking south from the site of Festiniog station at Llan Ffestiniog towards Trawsfynydd in March 2015. The line closed in 1961 but reopened for ...
Mark Bartlett 15/03/2015
2 of 2 images.

This section made use of the earlier Festiniog and Blaenau Railway which was converted from narrow gauge to standard gauge. A new separate terminus was required in Blaenau Ffestiniog.

Heading down the hill. Misty with a touch of snow as FR No.10 'Merddin Emrys' departs Blaenau Ffestiniog with the return journey to Porthmadog on 3rd ...
Alastair McLellan 03/04/2019 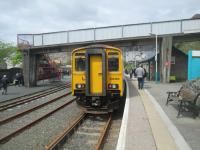