Rawyards Wagon Works: This view to the south west is over Baird Street to housing on Northburn Avenue, once the site of the Rawyards wagon works which was on the north side of the Ballochney Railway. The housing seen in this 1997 view has since been demolished. 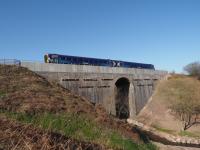 Carron Water Bridge [East Croft of Carmont]: Having trekked out to the Carmont derailment site on 3rd April 2021, I could not resist a visit to Bridge 328 on the way back to see the repairs that have been carried out since the parapet collapsed in January. The local DMU shuttle is heading to Montrose and the strengthening done to the bridge and river channel is apparent. See image [[75503]] from three months earlier.

Hutton Cranswick: Hutton Cranswick, around mid way between Driffield and Beverley, looks to be a well used intermediate station in a thriving village, with a small car park and better than normal shelters. The southbound shelter contains a ticket machine. The former station house and goods shed are both sited alongside the northbound platform. Station Road level crossing is at the south end of the platforms. View is of the former station house roadside facade with the platforms to its right.

Killington Lane: Ho hum, another narrow gauge ballast wagon (see image [[39967]]). This one seems to have a larger capacity - lets hope it is soon helping to build an extension towards Barnstaple.

Ribblehead Viaduct: Man with a mission: Ribblehead viaduct with a Network Rail employee in the foreground. The viaduct has been repaired in time for the summer season, and staycation trains.

Ellenbrook: Looking towards Tyldesley and Leigh at the site of Ellenbrook station on 6th April 2021. The railway embankment was removed when the guided busway was constructed resulting in the long slope down from the original elevation to road level. This view, taken from the ramp leading up to the greenway on the remainder of the loop line through Worsley to Patricroft, shows a Manchester bound bus calling at the Newearth Road stop that now occupies the station site.

Green Road: The station building at Green Road is considerably more modern than most on the Cumbrian Coast line. However, it is not only unstaffed but is also only a request stop.

Macbie Hill: Remains at Macbie Hill, looking south from the road bridge towards West Linton (Broomlee) in June 2004. The overgrown platform runs to the the left of the fence and the ruins of the station building can be seen on the right. Beyond are signs of old goods facilities, latterly serving RNAD Coalyburn, the southernmost compound of RNAD Leadburn. The waterway is the Coaly Burn, this being the original name of the station (until 1874). [Note : Although the line was officially closed in 1933, this section was taken over by the War Department during WW2 to serve what became RNAD Leadburn. Use continued well into the 1950s, with tracklifting eventually carried out in 1961.] 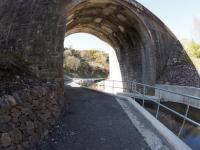 Carron Water Bridge [West Carmont]: The underside of Bridge 325 at Carmont, following post crash renovation, visited on 3rd April 2021. As is apparent here, there has been a fair bit of extra drainage put in as part of the rebuild.

Buchanan Street: B1 61330 reverses towards Glasgow Buchanan Street, on its way to take charge of the 11.35 service to Thornton, on 29th October 1966. Outgoing empty stock from the morning 'Bon Accord' express from Aberdeen is on the adjacent track.