Kirkdale: A view west over Kirkdale Depot from the station footbridge on 8 June 2021. Prominent in the view is 507006 that was involved in the Kirkby incident on 13 March 2021 with the damaged cab covered by a tarpaulin. Five Class 777s are also in the photo with the one on the left in front of the new Stadler building.

Drumgelloch: View towards Glasgow along the trackbed of the Airdrie - Bathgate route on the eastern outskirts of Airdrie in September 2009. The site of the new (second) Drumgelloch station is just beyond the electricity substation visible on the other side of Towers Road bridge, seen here with demolition work in progress. For a later view over the new station from the replacement bridge see image [[31088]]. 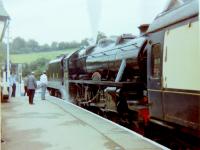 Grosmont: Black 5 (4)4767 George Stephenson about to depart Grosmont for Pickering in 1980. This engine was one of George Ivatt's experimental modified Black 5s with outside Stephenson link motion and at one time also had a double chimney.

Townhill Yard: A view east over Townhill Yard in 1997. The buffer had been placed on the line through to Dunfermline Upper which was still intact for a some way behind the camera. Sidings had been lifted recently on the left (both near and far away from the camera) and the stub of the workshops siding is still in place on the right. The Halbeath station building and level crossing are in the background beyond which is the M90 overbridge. 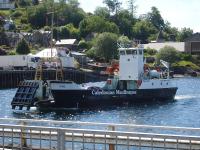 Oban Station Pier: Calmac Ferries MV Eigg prepares to disembark its consist of cars and foot passengers as it runs into its berth at Oban following the crossing from Lismore on 17 june 2013. This was one of the smallest Calmac boats in service at the time. 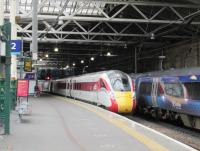 Edinburgh Waverley: The Up Highland Chieftain has departed from its usual Platform 19 and is seen accelerating past Platform 2 on 2 June 2021. The train from Tweebank on Platform 1 has just disgorged an alarming number of people given the Covid measures. Is continuing with half the number of trains during the day on this line a good idea, I wonder? 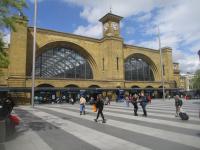 Kings Cross: Lewis Cubitt's masterpiece, the grand frontage of King's Cross station, beautifully refurbished and seen from the new King's Cross Square, on 22nd May 2021. The GNR arrived in London in 1850 but had to terminate at a temporary station at Maiden Lane, just to the north, until King's Cross was ready in 1852.

Uppsala Central: A street view of the main building at Uppsala Central now part of the Travel Centre incorporating a bus station and huge bicycle park [[56273]] with underground car park. The station building was opened in 1866 by King Charles XV and designed by the State Railway's (SJ) Architect A. W. Adelsvärd in what he called Dutch renaissance style. The façade is plaster-covered brickwork and the roof is of zinc plate painted with black linseed oil-based paint. The former circulating area inside the building is now used as shops and restaurants with outdoor seating. In the old days (pre-2011) before the Travel Centre was built it was very crammed when a train arrived and disgorged its load. Now there is a lot of circulating space underground and on the half-mile long platforms; I'm sure a lot of people will miss the blast of warm air and the waft of newly-baked cinnamon buns on entering through the platform-side door on a cold winter's day... 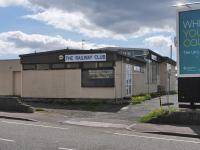 Sinclairtown [1st]: The Railway Club, adjacent to Sinclairtown Goods Yard, on 22nd May 2021. Closed for a couple of years, it will be demolished to make way for a fitness centre. I doubt there are many railway staff in Kirkcaldy these days.

Morwellham Quay: Morwellham Quay was served by a short incline from the Tavistock Canal which dropped down to the River Tamar. There was also an old mining system, the Devon Great Consols Tramway, which served further quays.

Kirkdale: One of Merseyrail's new Class 777s from Stadler sits in the sun on 8 June 2021. 777008 is one of five of these units seen on Kirkdale depot while others are stored at Old Walton's Jct near Warrington. Some test runs on the Merseyrail network have been reported but it was only around the depot that they moved during my time at the station. Of note these units are 4-car but they are around the same length as the 3-car Class 507s and 508s they will replace. They also feature articulated bogies.