Woodacre Crossing: 43046 leads the LSL 'Midland Pullman' set south through Woodacre running from Carlisle to Bristol on 12th June 2021. This was the return leg of a tour that ran out via the S&C and back over Shap. This was my first sight of this newly created excursion set and it looks absolutely splendid.

Crianlarich: Coming down from a climb of Mheal Dhamh via the Grey Height in 1997 afforded this evening view of Crianlarich station and junction from above. The lower station timber sidings were gone and timber was handled in the station. The station building, a replacement for the original, had not yet itself been replaced with the present waiting room in imitation WHR style.

Heriot: The former station at Heriot, as it was in the summer of 2013. At the far end of the old up platform stood the level crossing and beyond that the 1848 station building (which also once served as the village post office). Over to the right an Edinburgh bound bus on the A7 is about to pull into the stop near the junction with the B709 Heriot Way. The old building, level crossing, abandoned platform and road junction are no more. A pedestrian underpass is now located here ([[51465]]), while the B709 road has been rerouted a quarter of a mile to the south ([[75044]]).

Greenock Princes Pier [2nd]: Looking out from the carriage sidings at Princes Pier station on Saturday 4 October 1958. The platform lines are to the right and to the left are the goods lines leading to the sorting sidings, large goods yard and quayside lines of Albert Harbour. 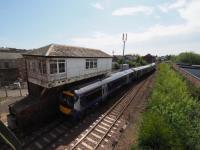 Arbroath: The 11:48 arrival at Arbroath from Edinburgh, 170408, heading past the signal box to the sidings for a very short lay over before returning to form the 12:10 service to Glasgow Queen Street on 3rd June 2021.

Fort William: LNER Thompson / Peppercorn K1 2-6-0 62005 stands ready to depart Fort William, with the morning Jacobite service to Mallaig on 20 June 2012. The K1 was in fact built by the North British Locomotive Co in 1949, as loco 26609, after the formation of British Railways. 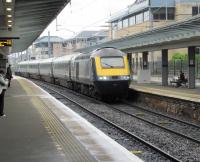 Haymarket: An HST from Haymarket Depot to Waverley makes its way through Haymarket station on 26 May 2021. Karen's characteristically bored-sounding 'Fast train approaching' warning must have been triggered as soon as it was signalled to leave the depot as it took several minutes before the train appeared - in no obvious hurry. 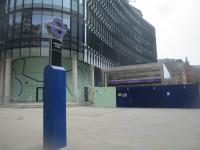 Liverpool Street [EL]: Not yet ready and still waiting for its first passengers, promised in December 2018, the new Crossrail station at Liverpool Street stands unopened in this view, on 29th May 2021. The ghastly glass office building on the left in the background stands on the site of the North London Railway's late lamented Broad Street terminus, opened in 1865, closed in 1986 and which should have had a Grade listing by English Heritage but was subsequently and sadly demolished with no regard whatsoever for its history nor architectural merit.

Girvan (New): With the station at Girvan behind the camera, this view on 3rd June 2021 looks west down the station access steps to part of the 'mining village' built by South Ayrshire Collieries Ltd in 1915 to 1916. They planned a new pit nearby, although it was never opened, but they had other mines in the Dailly Area.

Dumfries Goods: Looking south from Annan Road bridge to Dumfries Goods & Mineral Station in 1989. The presence of vans and piles of coal suggest the yard was still active at the time, with a small wagon repair facility prominent in the foreground.

Didcot Parkway: Freightliner 66570, westbound at 1040hrs through Didcot, with the Southampton to Lawley Street intermodal (Rep No 470A) on 27th April 2021