This railway is closed. It ran from near Longniddry to Gullane. The section between Gullane and North Berwick was not completed. Today the nearest stations are at Longniddry and Drem.

The line was built to serve Gullane and provide an alternative route from North Berwick to Edinburgh.

The line was a branch from a terminus at Gullane to Longniddry via Aberlady.

This junction between the 1846 North British Railway and the Aberlady, Gullane and North Berwick Railway opened in 1898. The signal box opened a year earlier. It was on the north side of the junction. The branch was single track, main line double.
... 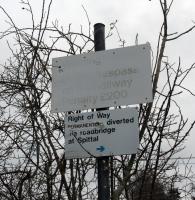 A public right of way runs from Lochhill to Aberlady - formerly crossing the East Coast Main Line via a footbridge at Aberlady Junction. With its ...
Ewan Crawford 26/12/2019

This view from the Gullane branch is towards Aberlady Junction where the branch met the North British's main line, seen here on the left. ...
Ewan Crawford 26/12/2019

View east from 101 324 on a North Berwick-bound service as it passes the former Aberlady Junction. The footbridge was removed with electrification. ...
Bill Roberton //1988

Deltic no 55005 The Prince of Wales's Own Regiment of Yorkshire takes a southbound train past the site of Aberlady Junction on the ECML in ...
Bruce McCartney //1978
4 of 5 images. more

This was a single platform station about a third of a mile south of the village.
...

Platform remains at Aberlady on the former Gullane branch seen here looking west towards the site of Aberlady Junction in December 2019. The area ...
John Furnevel 26/12/2019

Not all of the trackbed of the former line to Gullane has survived intact, with some long portions being ploughed out. One section which survives is ...
Ewan Crawford 26/12/2019

View west from the road bridge over the remains of Aberlady station in 1985 prior to the site becoming part of a caravan park. ...
David Panton //1985

Trackbed of the Gullane line close to Luffness Platform. The view looks north east to the terminus in 1999. ...
Ewan Crawford //1999
1 of 1 images.

This was the terminus of the Aberlady, Gullane and North Berwick Railway. It is now a housing estate.
...

Looking east at the former Gullane terminus. The goods station was to the left and passenger station to the right. [? 1997] ...
Ewan Crawford /03/1997

Looking west over the former Gullane terminus. The site is now a housing estate. The passenger station with a single platform was to the left and ...
Ewan Crawford /03/1997
4 of 9 images. more