This branch served the Knightswood Colliery, Skaterigg, Cowdenhill and Temple. It opened around 1875, a year after the Stobcross Railway from which it branched. The line left the north end of what later became Anniesland station at Knightswood South Junction to run west then south before continuing, after a reversal, to Netherton and Cowdenhill. The layout was altered over the branch^s history. Note that the branch was opened by the North British Railway before it opened the Glasgow City and District Railway in 1886.

Knightswood mining focused on iron ore and coal. The colliery was an old one, once associated with the Knightswood Waggonway (Dumbarton Glassworks) and the Dumbarton Glass Works. The lands were latterly owned by the Summerlee Iron Company but many of the major iron companies had been involved - such as the Carron Iron Works, Dundyvan Iron Works and Coltness Iron Works.

Much of the area was built over with housing in the late 1920s when the Jordanhill Brick Works closed, but the branch survived realignment with the opening of the associated Great Western Road and continued to serve brick and other works. It closed around 1965.

A bridge parapet for an underline bridge survives on Fulton Street with a very large overline bridge to its west. The trackbed near Great Western Road is walkable.

Another branch also served the ironstone pits in the area, leading south west from the north end of Anniesland station. Nothing now remains of this.

This junction is to the north of Anniesland station. To the east the original line, the Stobcross Railway of 1874 runs to Maryhill Park Junction, just west of Maryhill. This closed in 1980 and reopened in 2005.
... 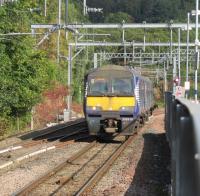 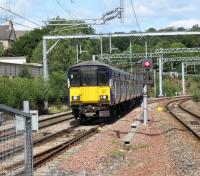 A Rutherglen service passing Knightswood South Junction on the approach to Anniesland. Rutherglen is not normally a destination, but engineering works ...
David Panton 25/08/2018

This works was opened in the 1890s by William Baird. It manufactured iron and steel girders and bridges, including the distinctive lattice footbridges for the Highland Railway.
...

One of the abutments of the single track bridge over Fulton Street remains standing. The location is east of the underline bridge (see image ...
Ewan Crawford //1999

Little remains of the extensive Knightswood colliery, brick works and the railway system except part of a bridge over Fulton Street and, just to the ...
Ewan Crawford //1999
2 of 2 images.

This mineral depot was a goods yard, a terminus parallel to Great Western Road served from the north west by the Cowdenhill Branch (North British Railway). There was a loop and road access was from Glencoe Street.
...