Cardross: Basking in sunshine 62005, with a support coach, amble south by the Clyde.

Letterfinlay Crossing: A concrete bridge seen high above Letterfinlay crossing over the Allt na Leitire. This was taken at the waterfall half way up the hillside from the lochside to the former railway.

Eastgate: View east along the overgrown track of the Weardale Railway at Eastgate, near the extremity of the line running from Bishop Auckland. The now privately owned former Eastgate station buildings and platform sit alongside the line, to the left. The track continues a short distance further west into the now demolished cement works site, whereas when the line continued on to Westgate and Wearhead it turned south just before the works to run over a, still extant, girder bridge over the River Wear. 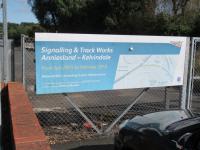 Anniesland: This 5-year-old notice of 'forthcoming' works has a long way to go before it beats the 33 year record held by the one at Yoker Depot (See image [[70320]]), but it would certainly be easier to remove. The link was necessary for the temporary closure of Queen Street High Level station, but it has seen no passengers since then (and little else by the look of the rails).

Pass of Brander Stone Signals: The stone signals in the Pass of Brander are usually described alongside photographs of a post holding two semaphore arms in the “off” position. [See Image 22517]. At each end of the 4 mile boulder screen, single arms prevail and at the westernmost end near Bridge of Awe the lever post carrying the weighted operating mechanism can also be seen.

Euston [CSLR]: LUL 1995 stock with a Northern Line service from Edgware to Morden via Bank calling at Euston, looking back north, on the afternoon of 16th September 2020. I have never seen a major London Underground station, especially one connected to a National Rail terminus, so completely deserted in the middle of the day. All down, sadly, to the ongoing coronavirus pandemic.

Gothenburg: HSS Stena Carisma, laid up for sale in Gothenburg on 13th March 2015. These high speed catamaran ferries have proved to be too expensive to operate.

Carlisle: 85012 enters Carlisle station with empty limestone hoppers from BSC Ravenscraig. In the left background is the chimney of Willow Holme power station.