This was the first junction west of Bathgate Polkemmet Junction.
...

This was the junction for the Armadale Branch (Monkland Railways). It was east of Armadale station.
...

Looking west towards Armadale from the A801 as work progresses on the missing link. Signalling infrastructure is also starting to appear here. ...
James Young 04/04/2010
1 of 1 images.

This is a two platform station with a large car park on the north side.
... 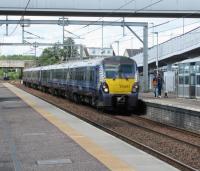 Armadale on Skye may be prettier but at least its humdrum West Lothian namesake has a station. The station is (and always was) some distance from the ...
David Panton 18/06/2019 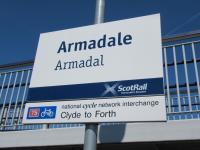 This is a Caldercruix to Edinburgh traih at Armadale on Sunday 8th October 2017. Caldercruix was acting as a terminus as the line was closed west from ...
Ewan Crawford 08/10/2017
4 of 41 images. more

This station was located to the west of the overbridge. The line was original single track. To the east of the bridge was a passing loop on the line when it first opened. The present Armadale station has opened on the site of the loop.
...