This is part of the Borders Railway (Network Rail).

The line runs through the site of the Monktonhall Colliery and passes to the west of Millerhill and the largely closed Millerhill Marshalling Yard.

The new route could equally be known as the Shawfair Deviation.

This short section of new line enabled the re-opening of the Borders Railway. In particular it provided a new crossing under the Edinburgh city Bypass as the solum of the original route was crossed on a long diagonal by the road.

This is the northern end of a loop which runs south as far as King's Gate Junction passing through Shawfair station.
...

A Borders line service bound for Tweedbank about to run through Newcraighall South Junction and onto the double track section on 15 May 2016. The ...
John Furnevel 15/05/2016 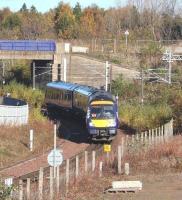 A southbound train on the Borders Railway approaching the double track section at Newcraighall South Junction on 3 November 2017. ...
John Furnevel 03/11/2017
4 of 43 images. more

This is a two platform station on the Millerhill Deviation (Network Rail), a new section of line required for the re-opening of the railway between Edinburgh (Newcraighall) and Tweedbank, south of Galashiels.
... 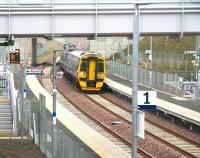 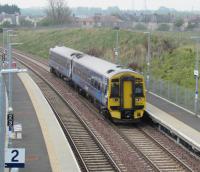 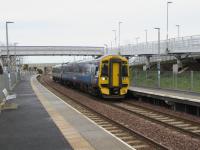 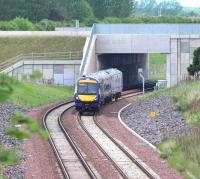 A southbound train on the Borders Railway emerges from below the Edinburgh City Bypass and approaches Kings Gate Points on 28 May 2017. ...
John Furnevel 28/05/2017

The works site at Sheriffhall is deserted on a Sunday morning ten days before Christmas 2013. The ^concrete box^ through which trains on the Borders ...
John Furnevel 15/12/2013
4 of 37 images. more 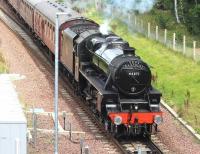 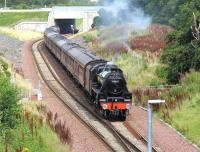 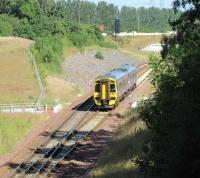 A Tweedbank service as about the enter the (rather limiting) single track section to Fushiebridge at King^s Gate on 6 July 2018. As it happens this is ...
David Panton 06/07/2018

This short lived station replaced Sheriffhall [1st]. It was probably located to the south side of the A6106 overbridge and opened with the Edinburgh and Hawick Railway (North British Railway).
...

A Sunday morning service on the Borders Railway approaching Kings Gate Points from the south on a misty 24 November 2019. The train is approximately ...
John Furnevel 24/11/2019

Looking south along the trackbed of the former Waverley route towards the bridge at Kings Gate in the summer of 2012. The North British line continued ...
John Furnevel 25/07/2012
4 of 17 images. more