This was a double track line. The original course of the Monkland and Kirkintilloch Railway at Gartsherrie followed a north-south orientation east of the Summerlee, Gartsherrie and Hornock branch of the Monkland Canal. The old portion of the Gartsherrie Iron Works was laid out on the east bank of the canal and to the west of the railway - making use of the relative heights with the charging side of the blast furnaces on the higher ground to the east and discharge to pig beds to the west by the canal. Eight furnaces were erected here (a further eight was added afterwards to the west of the canal branch, served by new lines.

The railway approach to the charging side was from the south, a series of tightly curved lines radiating from the Monkland and Kirkintilloch just north of Gartsherrie Road, approximately at the site of the junction with Hornock Road.

This was hardly convenient for a public railway as the ironworks grew. A new alignment to the east, cutting through high ground, was built to replace the original alignment. The original survived for a time as a loop, but evolved to be severed at the southern end, forming a reversing spur for the blast furnaces approached from the north at Gunnie (where Gunnie Yard [1st] developed). Initially the line remained railway property. A small yard served the works, there being not stockyard at first as coal, iron ore and limestone were worked nearby. This surviving portion of original alignment was also relocated further east during rebuilding of the original Gartsherrie furnaces and would survive as an access point, via reversal, to the Gartsherrie Iron Works until the works closed in 1967.

The Hornock Deviation had a junction at Sunnyside, directly replacing the original alignment^s junction at Howes between the Kipps branch and main line of the M&K.

With the opening of the railway west though Shettleston to High Street this junction was again re-aligned, a little to the south, to allow direct running from Kipps to Glasgow - this later junction being today^s Sunnyside Junction. Coatbridge Sunnyside station is on the formation created during this realignment on the Kipps branch. A yard, now gone, was laid out to the south of this junction on more or less the site of the original M&K alignment and its connection to the coal drops at Howes Basin.

Further improvement work to the south saw the main line of the M&K lifted up from street level onto bridges, transforming roads and railways in Coatbridge with the abolition of level crossings.

With the closure of Gartsherrie Iron Works in 1967 the deviation ceased to be a through line beyond its north end - the junction at Gartsherrie being taken out. It survived until the 1980s as an approach to Gunnie Yard [2nd] which served the cement works surviving from the iron works. The line is now disused and overgrown and its connection at Sunnyside Junction taken out.

This signal box was at the south end of Gunnie Yard [1st] on the former Monkland and Kirkintilloch Railway east of the Gartsherrie Iron Works.
...

This junction is the successor to the original junction between the main line of the Monkland and Kirkintilloch Railway and the Kipps branch, and the line to Glasgow.
...

This signal box was just south of Sunnyside Junction and Summerlee Yard. It was located on the deviation built through Coatbridge in 1872 lifting the railway up from street level and avoiding level crossings. The new alignment was to the immediate west of the original line. The signal box was very close to the northern end of this deviation. The box was on the east side of the line and ...

This junction is the successor to the original junction between the main line of the Monkland and Kirkintilloch Railway and the Kipps branch, and the line to Glasgow.
...

This is a two platform station with the main building, on the Glasgow bound platform. The brick built building is a single storey. The Sunnyside Coffee Company is based in the station building.
...

The Sunnyside Coffee Company is based in the station building at Coatbridge Sunnyside. A small modification is needed to the station sign - it is of ...
John Yellowlees 27/04/2017 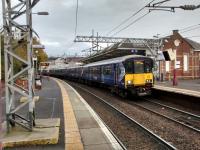 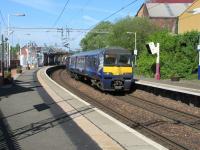 A sunny Sunnyside on 19 May with a Balloch to Airdrie service. Despite not being very central the station is well-served, with 6 trains a hour each ...
David Panton 19/05/2018
4 of 34 images. more