This line is closed. It was built to give the North British Railway a route to compete with the Caledonian Railway^s Dundee and Perth Railway. The route was longer and not as well engineered so could not compete for speed, but did serve different locations on the south bank of the Tay. The line was single track but land was taken for a double track with road bridges built to take two tracks. A west to south curve at St Fort was to allow trains from St Andrews [2nd] to approach Perth.

The Order of the Railway and Canal Commission of 28/03/1912 tells a story. This compelled the North British Railway to
- fairly develop traffic on the Newburgh line and work all shortest route traffic via the line
- increase the train service and through facilities
- keep open the St Fort West Junction to St Fort South Junction curve
- advertise the line including through route, season, tourist and excursion tickets
- work goods traffic via the line, when it constitutes the shortest route

This was a short lived terminus before the line from Ladybank was extended west to Abernethy Road.
...

The Edinburgh and Northern Railway, a double track line, was met by the single track Newburgh and North Fife Railway. The St Fort line doubled before joining and had a looped refuge siding.
...

The 6inch OS map of 1854 shows a siding and building at Glenburnie on the Edinburgh, Perth and Dundee railway between Newburgh and Lindores. Neither ...
Bill Roberton //1988

Built to last. The remains of an overbridge crossing the Dunbog Farm next the A913, east of Lindores in North Fife, photographed in July 2010. The ...
Brian Forbes /07/2010 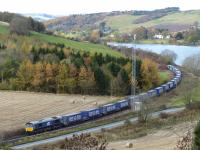 This was a two platform station with a passing loop on a single track line. There was a goods yard on the west side which was approached from the south. The signal box closed in 1928 but a ground frame remained for the goods yard. The station closed to passengers in 1951. The line closed in 1964.
...

This is small double track arched bridge over a minor road, crossing on an oblique. It is listed ^C^. It is typical of the line^s bridges which were built in mass concrete.. The line was single track, the structures double track to allow future doubling which was never proceeded with. Many of the route^s bridges were demolished, or were girder bridges, but this one remains standing. The arch is ...

The site of Kilmany station seen in 1996, not long after the houses to the left were built on the former eastbound platform. The view looks to St ...
Ewan Crawford //1996 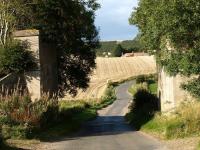 Old bridge abutments at Rathillet, just to the west of Kilmany on the former Newburgh and North Fife line, photographed in September 2009. ...
Brian Forbes 16/09/2009
3 of 3 images.

This was a two platform station on the double track approach to the Tay Bridge from Leuchars. The goods yard was on the west side, approached from the north. The signal box was on the east side opposite.
...