This line is closed. The line ran from Connel Ferry to Ballachulish and was built to carry slate away from the Ballachulish Quarries and delivery bauxite to the Kinlochleven Aluminium Works - although this was taken on by sea and later road. Today the nearest station is at Connel Ferry.

In addition to the new line various improvements to the existing Callander and Oban Railway were made, (some already planned to improve capacity), such as the enlargement of Oban station, adding of loops to reduce the lengths of the single track sections and the introduction of short double track sections at Connel Ferry and Callander (Dreadnought) to Callander and Oban Junction. Further east the line was doubled between Doune and Dunblane.

The architecture was Arts and Crafts, the stations noted for their large station buildings and surprisingly large signal boxes (contrast with those elsewhere on the line such as at Luib or Glenoglehead!).

This is a single platform station with a shelter. There is a car park on the north side of the station. At the east end of the station is a goods loop and oil siding (both out of use). The station was once far larger and a junction.
...

The first train of the day for Oban, formed by Corkerhill Sprinter 156467, pulls in to a deserted Connel Ferry station, where the track has recently ...
Mark Bartlett 27/03/2009 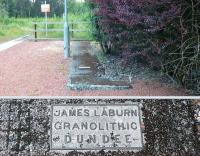 The end of the long-vanished west-facing bay at Connel Ferry, together with a close-up of the maker^s plate imbedded in the edging. Photographed in ...
Colin Miller 28/06/2010
4 of 33 images. more

Also known as Connel Ferry Viaduct. Bridge or Connel Bridge is used rather than viaduct as the structure has a long span crossing Loch Etive, and the Falls of Lora, and is not a series of similarly sized arches. The bridge is ^B^ listed. The metalwork is painted light grey, the approach arches are granite. The line carried a single track railway.
... 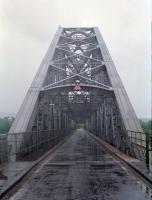 A view east to the Connel Ferry Bridge from the approach to Dunnstaffnage Castle, North of Oban. ...
Bruce McCartney 17/11/2018 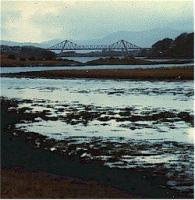 The site of North Connel halt looking south to the Connel Ferry Bridge in 1990. Nothing remained of the timber platform and waiting shelter. The ...
Ewan Crawford //1990 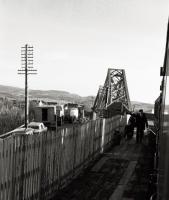 Leaving North Connel northbound having just crossed the Connel Ferry Viaduct on a train to Ballachulish in 1961. ...
David Murray-Smith 20/03/1961

The bridge at North Connel that once carried the Ballachulish branch, seen in October 1987. ...
Colin Miller /10/1987

The access path from the road to the former North Connel station on the Ballachulish branch in October 1987 with typical iron railings still in ...
Colin Miller /10/1987
4 of 7 images. more

This was a two platform station. The station had a large two storey station building, typical of the line, on the southbound platform and a large size signal box, also typical of the line. An example of the main building still stands in largely unmodified form at Duror. The southbound line was the faster line, the northbound curving off at each end to form the loop.
...

An overgrown gate and a small piece of platform is all the remains I could find of Benderloch Station on 10 July 2013, although beyond the platform ...
John Gray 10/07/2013

This was a short single platform in timber. There was also a goods siding here, approached from the south and on the east (landward) side of the line.
...

Extract from the Scottish Region timetable winter 1960-61 showing the Glasgow to Oban line and branches. There is usually something inexplicable in ...
David Panton 12/09/1960
1 of 1 images.

This was an attractive and large structure with two girders (150ft each, 40ft over high water) crossing the Creagan Narrows of Loch Creran, supported by a central masonry pier (the tidal race here being less than that at the Falls of Lora a central pier was possible) approached at either end by masonry arches. It was single track and carried a footway on its eastern side - intended to avoid ... 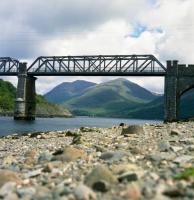 Creagan Viaduct in view looking east from the beach on the south bank. The viaduct has since been partly demolished and now a road bridge. ...
Aitken Scott //

In this summer of 1998 view the remains of the disassembled deck of Creagan bridge are being cut on the shoreline at Barcaldine, prior to ...
Clive Meredith //1998

Work underway on Creagan Viaduct in 1998 to convert the bridge from rail to road use. Two of the three supports were completely dismantled and rebuilt ...
Colin Miller //1998
4 of 15 images. more

This was an island platform station, which bore a strong resemblance to stations on the West Highland Railway. Access was by a subway. The northbound platform was built on a straight alignment, to allow fast running of non-stop trains, and the southbound curved.
... 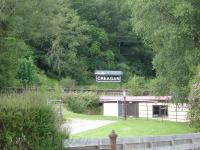 Running in board at the west end of the platform at the former Creagan station on the Ballachulish branch in June 2012. Photographed from the adjacent ...
David Pesterfield 19/06/2012

This was a two platform station with a passing loop and goods yard to the west. There was a two storey station building on the southbound platform, of a style which survives largely unaltered at [[Duror],] and a large signal box which was typical of the line. The southbound line was the faster line, the northbound curving off at each end to form the loop. At the south end, on the east side of the ... 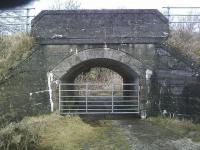 It wasn^t just the Mallaig Extension that used concrete for its major structures as this bridge that carried the Ballachulish branch near Appin shows. ...
Malcolm Chattwood 26/02/2011 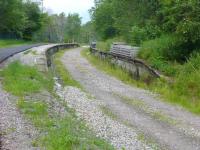 This former two platform station survives as a house, the platforms being the garden. The station building is almost unaltered from the railway period, with some additions. The platforms survive. It is the most intact station surviving on the former line. A number of railway cottages also remain nearby making this an unusually well preserved location.
...

Both the platforms at Duror station remain intact. Restored and converted station building behind me. ...
Alasdair Mulhern 14/11/2007

This siding served the estate of the Auchindarroch House (since demolished), just to the east. The siding was closer to Duror than Duror station. It was north of an overbridge.
...

View of the main building and remains of the southbound platform from the south end of the former Kentallen station in 1996. ...
Ewan Crawford //1996

The water tank at Kentallen is located some distance from the former station across the road on the hillside above the A828. ...
Ewan Crawford 10/06/2013

The south end of the former Kentallen station in September 2005, with holiday homes occupying much of the site. ...
John Furnevel 29/09/2005 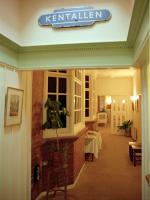 Interior of what was then the ^Holly Tree Hotel^ showing what was formerly the outside of the up platform building to the left. The tracks were to the ...
Ewan Crawford //1996
4 of 10 images. more

This was a single platform station west of Ballachulish. The station was around half a mile south of the ferry slip, the ferry crossing now being replaced by the Ballachulish Bridge.
...

View over Ballachulish Ferry and up Loch Leven. The ferry is midway across to North Ballachulish and the railway can be seen on the right running to ...
Ewan Crawford Collection // 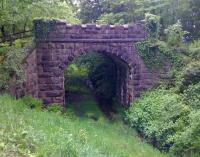 Old bridge on the former Ballachulish branch to the west of the site of Ballachulish Ferry station behind the golf course. Photographed in May 2009. ...
Tony White /05/2009 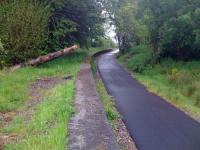 The platform at the former Ballachulish Ferry station (closed March 1966) is still in surprisingly good condition, with the trackbed for several miles ...
Tony White /05/2009 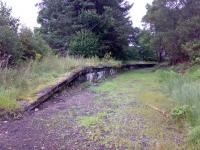 This was a timber locomotive shed on the north side of the station at Ballachulish.
... 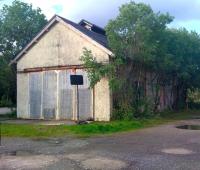 The old locomotive shed at Ballachulish. Still standing in May 2009, having seen several years use as a garage.
...
Tony White /05/2009

This was a two platform terminus opened at East Laroch next to the Ballachulish Slate Quarries and their tramways. Unusually a house which predated the station ended up on the platform and now, with the station gone, still stands. The Ballachulish Medical Practise is based in the former station building.
...