This line is closed and much of the route used by the M90. The line ran from Mawcarse Junction to Bridge of Earn via Glenfarg and was opened in connection with the Forth Bridge Railway.

Mawcarse to Bridge of Earn

This was a two platform station.
...

Looking north east towards the junction from the former loading bank at Mawcarse in 1996. The station^s island platform was on the right.
See
Ewan Crawford //1996

Overbridge to the west of Mawcarse station where the trackbed is crossed by the A911. View looks west. [With thanks to Brian McDevitt for correcting ...
Brian Forbes 01/01/2007

View NE from Arlary Bridge. Mawcarse Junction site is still visible. This was a main junction to either Perth or Ladybank from Kinross and the south. ...
Brian Forbes 29/03/2008

Remains of the east/northbound platform at Mawcarse in 1981 from the road bridge to the east of the station, the view looks west. The southbound ...
Craig Seath //1981
4 of 4 images.

The trackbed of the former Glenfarg Line has played host for thirty years to these black ponies. The high wall to the right is part of the bridge that ...
Brian Forbes 04/11/2008 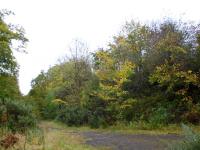 This is a disused double track tunnel north of Glenfarg Viaduct and south of Glenfarg North Tunnel. The tunnel is 517 yds long.
...

This is a disused double track tunnel north of Glenfarg South Tunnel and south of Kilnockie Viaduct. The tunnel is 507 yds long.
... 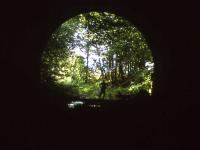 There appears to have been a platform south of Balmanno Castle for either railway or castle use. A platform is depicted on the 1901 25 inch OS map. This is on the northbound line, south of the castle and crossed by a minor road bridge.
...

This signal box was located south of Bridge of Earn [2nd] and north of Glenfarg. There was a crossover only. It was south of the village of Dron and west of Balmanno Castle.
...

The view south along what was the Glenfarg route (now M90) looking towards the site of Balmanno Signal box. The box was on the west (right) side of ...
Ewan Crawford //1997
1 of 1 images.

This two platform station was immediately west of the junction between the lines to Ladybank and Glenfarg. The junction was controlled by a signal box in the ^V^ of the junction, aligned to the Glenfarg route (opened around 1890 for the new route, 1890, and station, 1892).
...